Nietzsche's super-man is a nephew of Emerson's plus man

God is just the totality of necessity (which includes room for manoeuvre by monads) and that explains the entire history of the actual world. That means that God is not other than the physical world, because He is an entity of a different category. The physical world is entailed within God. God is not someTHING other than it. In a sense Hegel has fallen into the stuffiest trap and wanting all entities to have the same token status.

Leibniz’s God is not a “thing,” you say (and I say, So far so good!), but his God is an “entity” (“of a different category”). If his God is “an entity,” I take it he is not the same “entity” that the created world is. Here we have the problem that Hegel brings out: as soon as there are two entities, they are both finite, each limited by not being the other.

I am not sure I am prepared to quite down your route of argument in relation to Good but at least I think Good is something that needs some very careful consideration and explanation. You might well be interested in Colin Morrison’s ‘The Blind Mindmaker’ which tries to explain human experience, with a very important place for value and God. Colin and I are arguing about the physics but I like his general approach.

I still think Hegel is wrong about Leibniz. Leibniz clearly understood this consideration. He is not always entirely clear about his ontology, [...]

Only because physics eliminates (either through a simplifying assumption or by metaphysical positioning) consciousness and person, since a long time.

Plato's approach is the only approach which does not eliminate consciousness, soul, persons, and can explain why we belive (wrongly) in a physical universe which would be fundamental.  It explains physics where physicists take it for granted.

Now, imo, Leibiz is a coming back to Plato, or to a form of neoplatonism. But he is a complex author, and he seems to have change his mind often on the subject, a bit like Wittgenstein.

I do not think physics necessarily eliminates consciousness. Newton was clear that the phantasms of colours in the mind were part of the story. Leibniz focused on the underpinnings of physics, or metaphysics and held that perception, or consciousness was the basis of everything. I agree that many practitioners of physics have bracketed out consciousness but many did not - Eddington, Schrodinger, Pauli etc. I also do agree that there is a log jam because the neuropsychologists who are actively interested in consciousness make use of a physics completely divested of any reference to it.

I think physics rightly eliminates person. That is something I agree with Deepak on, there is no such entity as a person. I see a person is a narrative that runs like a river through a domain of the universe - purely a story to be listened to. The conscious entity is a human subject, which is something quite different - perhaps not too far off a Cartesian soul or Leibnizian monad. That is what is glaringly missing from the current neurophysiological view.

Leibniz admits to valuing Plato but he starts afresh too. I am not sure that he changes his mind much after 1685. People have often thought he changed his mind but I think that is largely a reflection of the fact that he shifted the language he used in a constant struggle to make himself intelligible on difficult insights. His interests in both the subjective point of view and in basic physics in terms of collision mechanics do gel in a new way with Specimen Dynamicum and New System around 1695 but not in a way that requires any change of mind I think. I think Leibniz is a much clearer thinker than Wittgenstein!!

Note that Leibniz almost discover the universal languages and machines. theoretical computer science can help to reread ancient philosophers. In fact when a machine looks inward, she develops a discourse close to the neopythagorean and the neoplatonist (themselves quite influenced by Indian and Chinese philosophy (directly and indirectly).

Indeed, I spent a happy hour inspecting the workings of one of his calculating machines in Hannover last summer with the curator of the Archive.

ENCOURAGING NEWS: ANOTHER BLOGGER QUESTIONS THE USE OF 'AN INVISIBLE HAND'! https://t.co/R8OGqkK9qb

What is American greatness now? What makes us exceptional? -@wellman4444 https://t.co/5joiQgQJSS - https://t.co/ID5oS0Gyvq

[Leadership is the art of persuasion—the act of motivating people to do more than they ever thought possible...] https://t.co/2wtObImHFv

Reading Sri Aurobindo, Osho endorses, [can make you aware that you are not what you appear to be – you are far more] https://t.co/2iHFwdJ3yX

https://www.jstor.org › stable
by JO McCormick - ‎1953 - ‎Cited by 13 - ‎Related articles
In these same years Emerson is sniping at Wordsworth for being almost a great man. Wordsworth is "a genius that hath epilepsy, a deranged archangel." Emerson's concept of great- ness in these years is almost  ...

Goethe as Viewed by Emerson - jstor

https://www.jstor.org › stable
by VC Hopkins - ‎1958 - ‎Cited by 10 - ‎Related articles
(I836), Ralph Waldo Emerson's poetic paean to man and the cosmos. Bacon's "knowledge as power" ... deceiving and deformed images" of his own mind or the great books of the past' (even though Bacon is ...

by FM Darnall - ‎1914
to become better, that the source of man's power is from above, that the senses have af- fected the soul so that it looks on time and space as real, striking in the similarity of ex- pression. Emerson, in an address ...

Emerson from an Indian Point of View - jstor

by H Maitra - ‎1911 - ‎Cited by 13 - ‎Related articles
dox Christianity, but in his awakening men to a sense of the Infi- nite revealed in the finite and to a consciousness ... the great mark of superior intelligence, Emerson not only prefe insight to the power to demonstrate, ...

The Religion of Emerson - jstor

by JW Hudson - ‎1920 - ‎Cited by 5 - ‎Related articles
If the Jew of Amsterdam, the great Spinoza, could be called. "God-intoxicated" for his pantheism, ... supreme over the wills of men that Emerson explicitly says that none of us can wrong the universe, even if he ...

by CG Shaw - ‎1914 - ‎Cited by 12 - ‎Related articles
Emerson, and Nietzsche agreed that the good is the strong, the bad the weak; in such ethical dynamism lies their ... The result of the economico-social arrangement of man- kind was to expatriate the human ego, who ...

Dale M. Schlitt - 2016 - ‎Philosophy
In a letter to James he considered Schelling 'like a scientific man' and his own philosophy 'Schellingism ... accessed January 28, 2014, 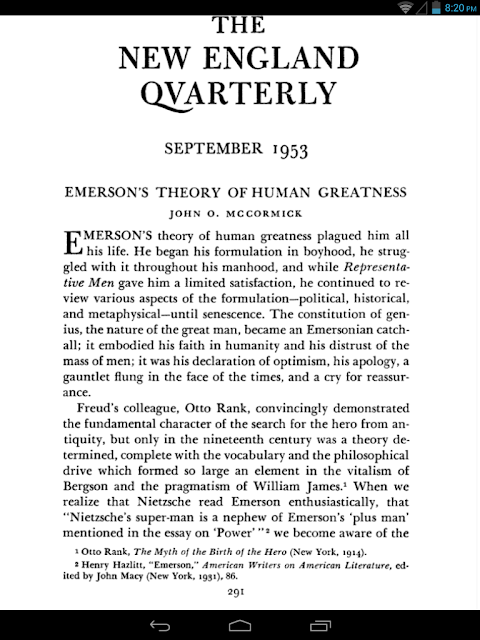