Poetry as Socio-proctology
Jason Stanley on Trump's India visit - Jason Stanley writes in the Guardian- In the early 20th century, the US deployed citizenship strategically to exclude non-whites and non-Christians, which ...

An und für sich
Reading the Qur’an: Muhammad and Moses - [This semester, I am blogging my course on the Qur’an. You can see my previous post here and the whole series here.] I was very gratified that when I put t...

The Immanent Frame
space, place - When it comes to space and place, in the Universe of Terms, what has grabbed my attention over the past several years is how they ought to be understood in...

Sri Aurobindo Studies
The Struggle Between Good and Evil in Human Psychology - Sri Aurobindo translates Chhandogya Upanishad, Chapter One, Section Two, Verses 1-6: “The Gods and the Demons strove together and both were children of the...

The Indian Philosophy Blog
The theology of Vaikuṇṭha: Why should you want to be in heaven? - We all know so many clever jokes about how hell should be preferred “because of the good company” and about how boring should heaven be. Let me take the ch...

enowning
- B&T workshops in the UK. With an eye to the 2027 centenary of that book’s publication, this series of workshops will retrace Heidegger’s steps, each works...

The Chrysalis
Truth: Ultimate and Relative - It’s quite simple, in a way. Buddhism, like early Christianity, makes a distinction between “Ultimate Truth” and the domain of “Relative Truth”, which is t...

Savitri Era Learning Forum
Socratic irony, Galileo's error, and Gargi's silence - "Only modern science has insisted on trying to explain life on a purely mechanical-chemical level, and has failed repeatedly to even come up with a definit...

Larval Subjects .
Flat Ontology, Questions, and Assemblages - I’ve been having a lengthy discussion with a very good friend about normativity and how we go about determining values. One of the things that keeps coming...

the red pill <.>
The role of music in society - Sacred imagery: Human body as Veena - a musical instrument What we hold to be the highest ideals in life also dictate what we do in the humdrum of everyday...

Savitri Era Devotees
OM Is The Eternal Brahman - The Mandukya Upanishad, while relatively short, is focused entirely on an in depth examination of OM, in both its esoteric and its outward significance. O...

Footnotes2Plato
Thoughts on William James, Pure Experience, and Materialism - Idealism and panpsychism seem to me to make easy friends in the debate against materialism. They both affirm that consciousness or experience or mind in so...

Feel Philosophy
Uberman may come flying - If you harbour even an iota of desire to understand #TheMother & #SriAurobindo, here's a chance just at a glance. #SavitriEra: Sri Aurobindo's theoretical ...

"Only modern science has insisted on trying to explain life on a purely mechanical-chemical level, and has failed repeatedly to even come up with a definition of life on that basis, as it must since life and matter are inherently understood as being distinct principles. Reason is one, thus modern science, as the honest study of reality, must eventually concur with the same truths that human reason has established in our philosophical and spiritual traditions. It is due to the progress of science that we are led to acknowledge the limits of science and the importance of recognizing life as a distinct principle beyond the mere material or naturalistic conception of Nature. The whole concept of Nature, itself, cannot be encompassed simply in terms of atoms, molecules and their physical and chemical reactions. A deeper truth has to be sought in the corresponding reality of thought and spirit. It is hoped that this brief introduction to the logic of life will inspire further study into this deeper reality."
⁠— Śrīpād Bhakti Mādhava Purī Mahārāja, Ph.D.
...
Hegel makes these point in his Science of Logic and also in his treatise Encycloepedia of Nature. The Idea exists as pure thought. That is without extension. But still it is Absolute Idea as Spirit and so is aware of itself and also its negativity. Spirit because it is Absolute, knows its own limitation and the same can overcome its limitation. And because Spirit is absolute it finds itself beyond its limit as well. That is why Spirit or The Idea is Absolute. In this way Absolute is truly infinite.

Due to this overcoming of its own limit, The Idea becomes the idea outside of itself by expressing itself in Its Other, i.e. Nature. The Idea does not exist only in the Thought, but also in Thought’s opposite, i.e. extension. Therefore Nature includes all forms of self externality.

That’s why the concept of death becomes important. Hegel says Die to Live [4[. Because Reality (Spirit) is by and for itself. When we can die in externality, i.e. in the search for so called freedom, that we actually become free for the first time. That is the Spiritual World, where truth is spontaneous, or free. There is some appearance of freedom in Nature, no doubt, but that is not in the true sublated form. Just like a prisoner is doing something in the jail, but we know that the jail is not his real home. Therefore the Spiritual world is the true home soil. Therefore everyone becomes free for the first time when they come in harmony with Reality.

Srila Bhakti Rakshak Sridhar Deva Goswami Maharaja, the founder of Sri Chaitanya Saraswat Math recognized that among all western philosophers, Hegel was very good. And we also in turn heard some of these topics from our Gurudev, Sripad Bhakti Madhava Puri Maharaja Phd. And everyone can derive great benefit from his association and contributing to his service as he served many great personalities like Srila BR Sridhar Maharaja and Srila AC Bhakti Vedanta Swami Prabhupada.

Organic wholes are not a result of addition of parts. They are produced from already existing wholes and are irreducible to mechanical or chemical logic. In this way natural processes have been described in philosophy.
But the biological studies in modern science have yet to let go of the mechanical bias in their ontological thinking. Socratic Methodology gives us a precise methodology to settle the question. We can focus on the question: Where is the center of the functional unity of the cell.

The subjects of Socrates' conversations often revolved around search for a definition focused on the true nature of the subject under question and not just on how the word is used correctly in a sentence. Hence our focus should be what is the true concept of the cell, rather than what we think nature should be, or what merely a mechanism should be. We must let go of our different biases and allow nature to reveal to us.

Why have we moved away from the logic of organic whole which was understood by philosophers like Kant, Hegel, Aristotle and Plato. Kant had even said that there will never be a Newton for the Blade of Grass. Then all of a sudden why the current shift of ontological thinking about the unity of the functional cell to a mechanical logic.

Why there is no result after more than 150 years attempts to manufacture even a single bacterium from de novo processes in our advanced chemical labs even after spending billions of dollars worth of time and manpower. What is the Causal principle behind the cellular function. Why is it still irreducible to linear simplicity. Cell continues to display circular complexity in its causal flow. So how can we accept the mechanical reduction of the organism.

Philosophy is not merely an enterprise of finding answers via established methods and moving on. You are thinking about thinking while trying to think about questions that you have little idea how to answer. And this is hard. Really hard. As I often tell my students, if philosophy is not difficult, you’re not doing it right!

Gārgī is thinking about the fundamental nature of existence—what it could be, how we could know it, and whether we could put it into language even if we did know it. As important as philosophical debate has been and remains in India and elsewhere, you can’t always be worried about your next move in the debate. Sometimes you need to slow down and think rather than offer the first response that comes to mind.

I think this lesson could be especially important to people interacting online. There is a tendency to skim headlines, tweets, or blog posts and immediately rush to respond, but what if instead you thought silently before commenting? Often our initial gut reactions turn out to be wrong upon further reflection. A bit of silent thinking can help to sort out what to say and how to say it. It can help you to avoid misunderstanding others. It can get you immortalized in an Upaniṣad (at least that worked for Gārgī).

I will fall silent now so that you, dear readers, can think about this for yourselves. Cross-posted to my personal blog.

The speaker was Dr. Alok Pandey who spoke on the topic, “Why Do Bad Things Happen to Good People?”

Kundan Singh (HUM '08) will be giving a lecture at the Cultural Integration Fellowship entitled "Life and Legacy of the Mother of Sri Aurobindo Ashram." #fridaythoughts  #CIISAlumni https://t.co/CJdqpxIxOg

Economists should learn lessons from meteorologists

Most economists (formally-trained as well as self-appointed) do macro forecasting of business cycles with fancy charts & high-sounding lingo in trendy conference halls & op-ed pages of newspapers! Ground-level realities are given a go by!

Here is a detailed review of the book 'Galileo's Error' by Philip Goff @Philip_Goff Whether you agree with the author or not this book is important for those interested in consciousness studies and philosophy.  https://t.co/AwQiyEnZD0 via @swarajyamag

In the review: It seems the Saiva Siddhanta scholars seem to have come up with a proto-variant of Mary-in-b&w realm. And Swami Vivekananda and Dr. Ambedkar had put forth an argument for ethics and democracy based on non-duality.

There is a category of challenges called tripāda-samasyās, which are tri-lined. This poses greater difficulty than others, for all 3 lines are disconnected, and are culled out from different poems.

One of the most fascinating tales in the Mahabharata is the dialogue between Yudhishtira and Yama on the banks of the enchanted pool. This episode is popularly known as the ‘Yakshaprashna.

The Esoteric Sense of the Ashwamedha, the Horse Sacrifice https://t.co/zJbog54mC4

Posted by Tusar Nath Mohapatra at February 22, 2020 No comments: Links 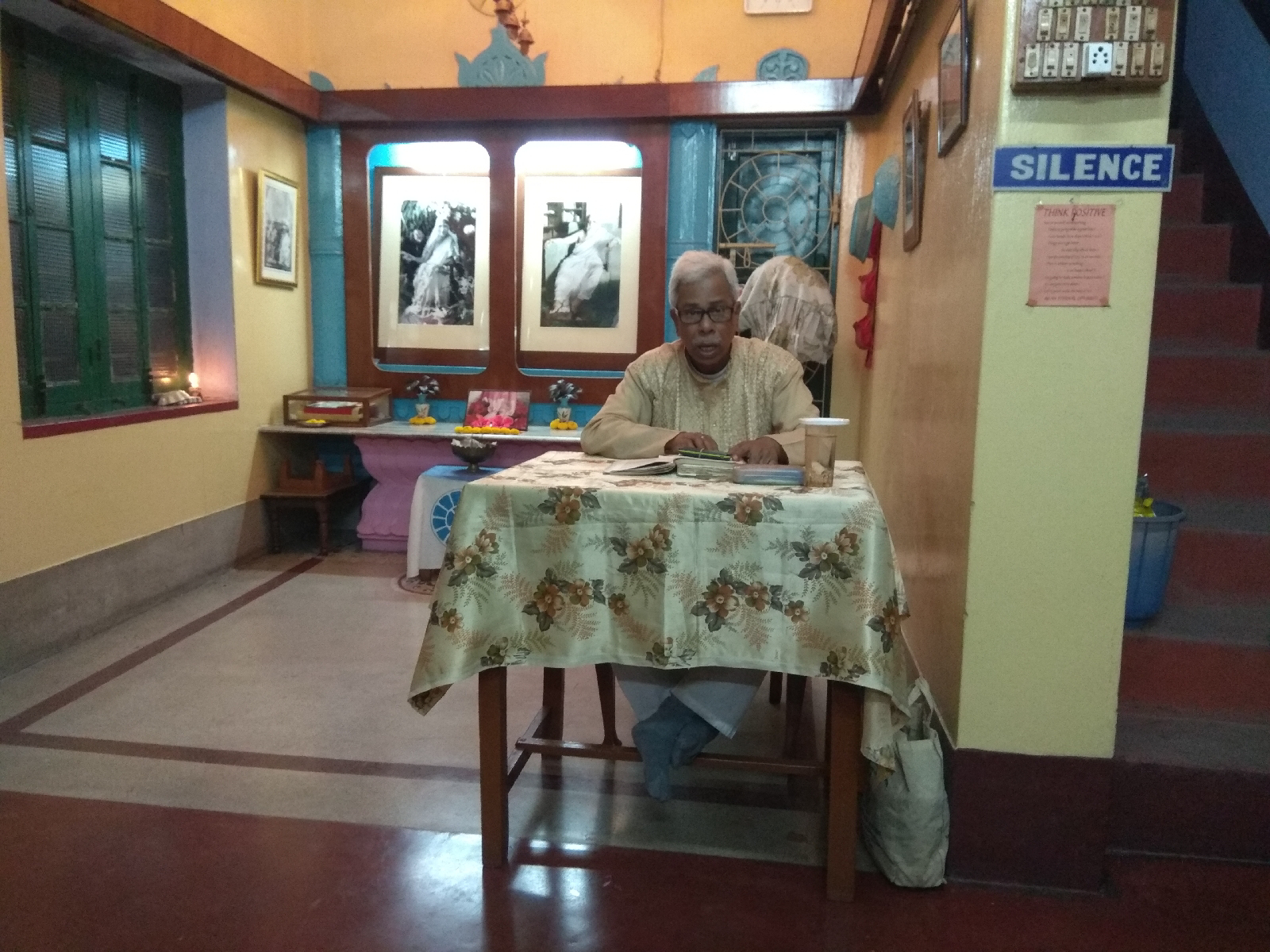 Posted by Tusar Nath Mohapatra at February 19, 2020 No comments: Links

Posted by Tusar Nath Mohapatra at February 07, 2020 No comments: Links